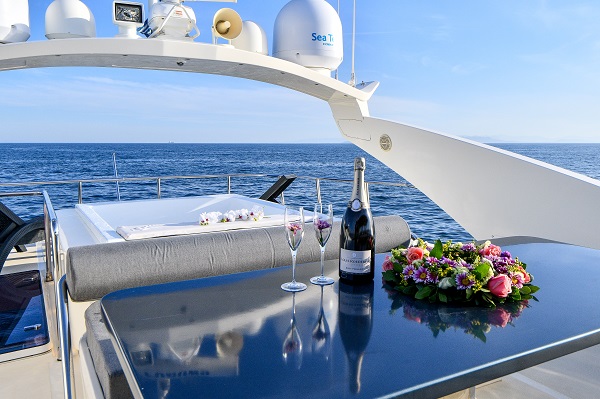 oarded AMER-ICA and been welcomed with a glass of cold champagne you’ll cast of and set sail for Kythnos.

Kythnos is the gateway to the western Cycladic Islands, it serves as many charterers first or last stop on their adventures around some of the Mediterranean’s most beautiful destinations. Kythnos has around 70 beaches, many are still not accessible by road. You can take advantage of these using the boat tender, which the crew can use to take you to town for an explore on foot or for lunch/dinner in the evenings should you wish.

On this passage, you’ll stop off underneath the Temple of Poseidon for a memorable swim and photo opportunity, built during 440 – 400 BC, it’s one of the major remaining monuments of the Golden age in Athens.

Once you arrive at Kythnos, a stroll through Driopida town and a short walk through the Katafyki Caves is recommended, they never cease to amaze guests that take a moment to learn about the interesting backstories behind them. 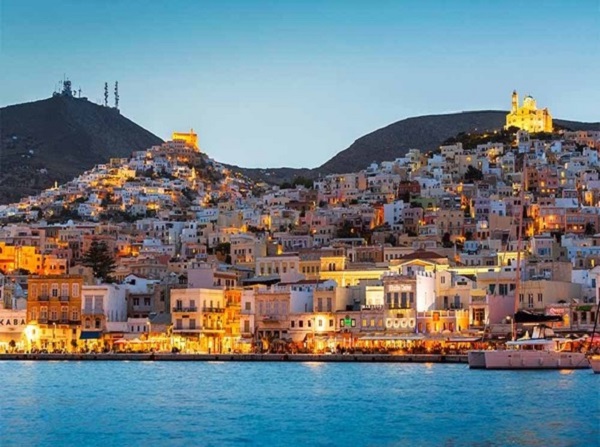 After your first breakfast on-board AMER-ICA, you’ll have the option to swim at the iconic Kolona beach, one of the most photographed pieces of sand in the Aegean, after this, you’ll weigh anchor and make for Syros.

Syros might not be as popular as its neighbouring Paros, Mykonos, and Santorini, but that’s where it’s charm lies. Boasting the beautiful Cycladic landscape minus the crowds, Syros is perfect for those looking to relax and unwind in the Greek islands. You’ll moor just off the coast of Ermoupoli or “Town of Hermes” where it’s highly recommended you explore the Venetian and neoclassical buildings that make up the capital of the Cyclades islands. 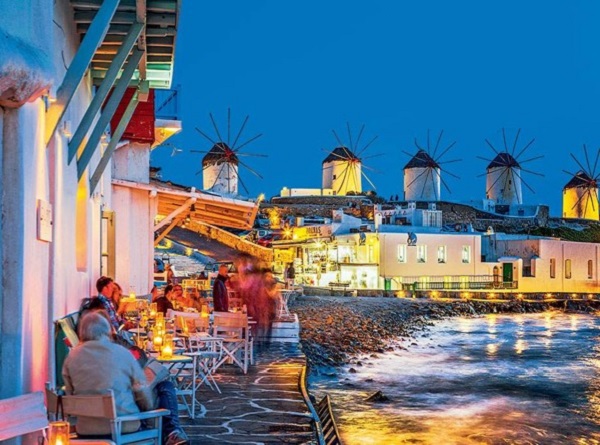 Syros to Mykonos is the second shortest passage on your trip, giving you ample time to make the most of your time in this increasingly popular island. Before you get there, your captain will anchor off for Lunch on the way at Rinia island, where you can enjoy a dip in some of the clearest water the Aegean has to offer.

It’s only a short trip across the straight to Delos where you can explore this uninhabited island harbouring some of the most important historical, mythological and archaeological sites in Greece.

It’s then back to the yacht for showers and spruce up before dinner aboard or a trip into Mykonos itself to sample its famous nightlife, surely an experience not to be missed. 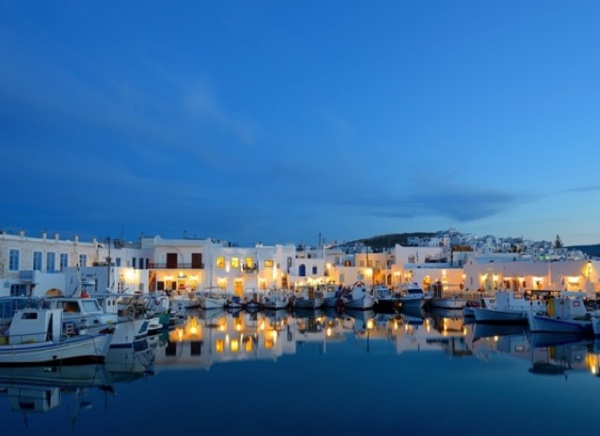 Your next passage directly south of Mykonos sees you arrive in the azure waters of Paros, best known for its beaches and traditional villages. It’s the most famous beach is on the north coast where you’ll arrive into, it’s called Kolimbthres, here the natural rock formations create shallow coves that lead to golden sand allowing for relaxed swimming and snorkelling in idyllic conditions.

The countless sightseeing opportunities continue ashore with the option of visiting the Monastery of Panagia Ekatontpiliani, and its spectacular interior, the building was designed and constructed in the 4th century AD and is located only a short walk from of the port of Parikia, the capital of Paros.

Parikia’s central location in the Cyclades means it houses some excellent seafood restaurants and of course it’s nightlife is somewhat legendary a night out here is not something you’ll forget in a hurry. 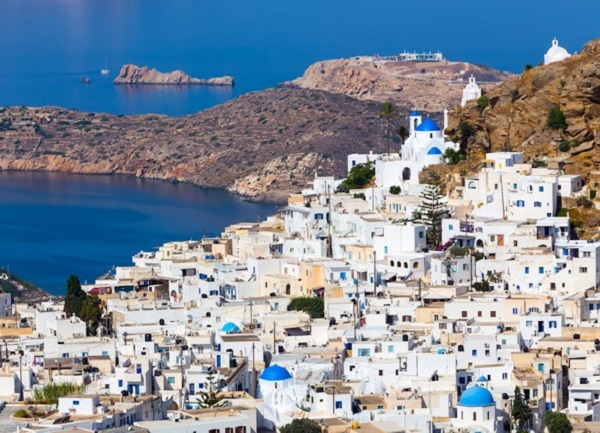 Ios has a reputation as a young traveler’s hotspot for revelry but it has much more to offer than just a night out. It’s hilly relief features cliffs that fall into the sea on most sides creating some spectacular vantage points across the Aegean.

Ios Chora, (Ios Town) the only main town on the island is a fifteen-minute walk from the port on the westward-facing hilltop. Best explored during the day when most visitors are on the beach, this little town charms visitors with its collection of restaurants, fine jewelry parades, souvenir shops, and mini markets.

The breathtaking view from Panaghia Gremiotissa, the highest part of the village is certainly worth seeing if you're partial to sunset this could be a highlight of the trip. 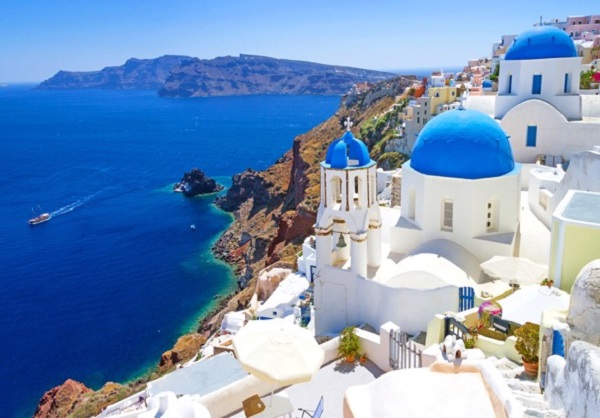 The next destination on your charter is possibly one of the most recognisable locations in the world at the moment. Scores of influencers have transformed this town into a must-visit for world travellers, but this will not be a worry knowing you have your own private hotel moored just offshore.

Santorini’s famous blue chimneys set atop the whitewashed cubiform houses and narrow winding streets are beautifully built, they’re carved into what seems like impassable hillsides that drop down into an underwater crater formed by a volcano that erupted and devastated the island in the 16th century BC.

A stop in Santorini is not complete without a visit to its illustrious ‘Red Beach’. Where at all possible it’s best approached by sea to really enjoy its unique topography and colouration, crowds lining the narrow paths leading down to it also make the tender the best way to explore this iconic waterline. 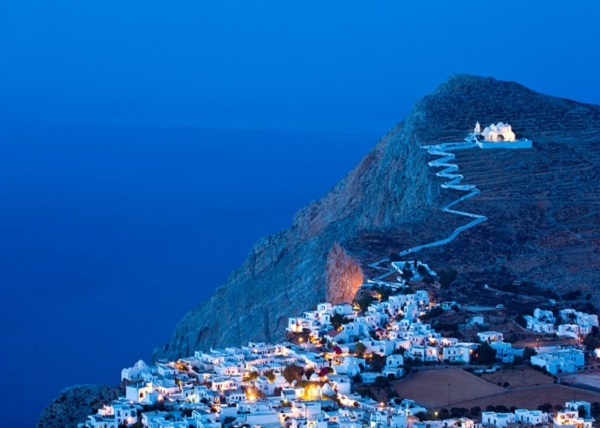 Folegandros, reportedly named after the son of King Minos, was once thought of as so remote that political prisoners were exiled here up until the last century. Nevertheless, its beauty and charm meant that many of those that were sent here chose to settle permanently.

The best beach for swimming on Folegandros is called Agali, the cove hosts a number of very small inlets on the southern side, these can be explored with snorkelling gear which is provided on AMER-ICA.

Milos is the southwesternmost island in the Cyclades chain, it’s natural beauty is trumped only by the significance of the discovery made there in 1820 by a local farmer. The Venus de Milo now sits in the Louvre museum, the story of its creation, somewhere between 130 - 100 BC, remains a strong part of the culture on Milos. A visit to the discovery site is an absolute must for any lover of sculpture and Ancient Greece and the crew are well set to show you the way.

Whilst in Milos charter guests are encouraged to jump into the tender and explore the caves and arches at Kleftiko beach. The brightly coloured rock faces give an amazing insight into the geometry of the area and provide some amazing places to swim in the turquoise waters. The coves reportedly provided a safe haven for pirates to moor their boats in the lea of strong prevailing winds, hence its other name ‘Pirates Cove’. 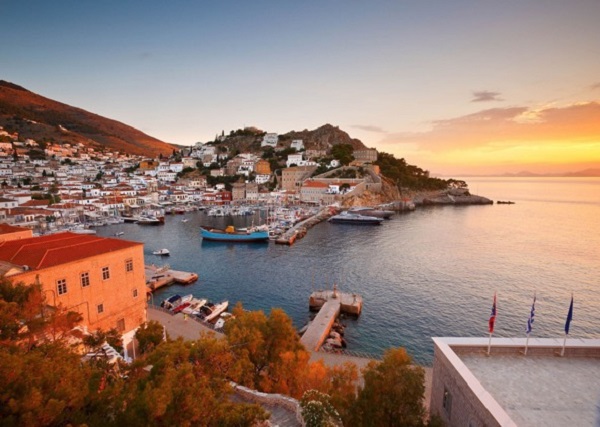 This passage will see you cross the Myrtoan Sea to Hydra, the easternmost Saronic island and widely regarded as one of the most cosmopolitan of all the Greek islands. There is only one main town, simply known as “Hydra Port”.

Hydra is unique in that Rubbish trucks are the only vehicles allowed on the island, cars and motorcycles have been banned by the Government, leading the local “Hydriots” to adopt walking as their main form of transport on land, with horse and donkey led carts used for moving heavy goods around. Hydra has a strong maritime history and is home to the Kamini yacht club, an international yacht club based in the port of Kamini.

Getting in the water on Hydra simply must be done at Bisti Beach, it’s charming sun shades lining the slim beach that is bordered by trees create a lovely relaxed atmosphere and the water is extremely clean here. 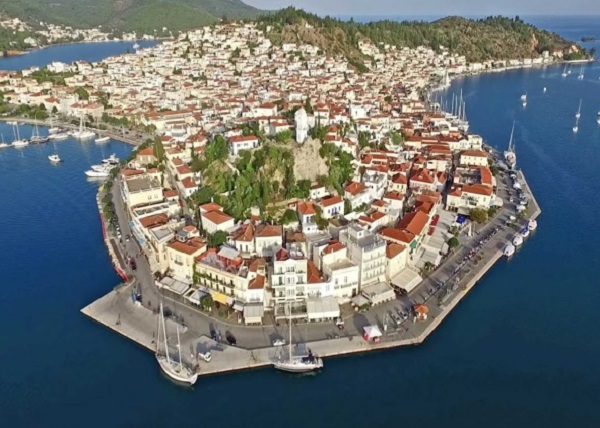 Due to its proximity to Athens, Poros has some amazing amenities, it’s popularity for weekend getaways from the mainland has led to the main “Poros Town” flourishing, its traditional taverns and restaurants located along its seafront promenade come to life after dark, with a walk up to its famous clock tower a brilliant place to cap off what we hope has been a trip of a lifetime.

Enjoy your last breakfast aboard AMER-ICA and savour the cruise back to Athens, the crew will help you disembark and you can say your goodbyes to those who have made your stay everything you'd expected and more.

Click here to find more boats for charter or yachts for sale.

1. Where do I charter a yacht in Cuba?

3. Where to Charter in the UK?

4. Everything you need to know about chartering a boat. 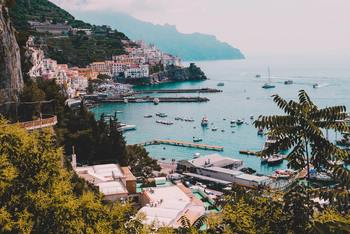 Whether it’s getting-off-the-beaten path and discovering isolated beaches and remote coves, being in the thick o... 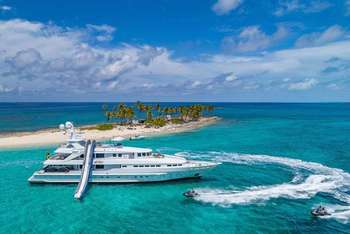 Why Superyacht Charters with Kids are the ...

We often think of superyacht charters as a holiday for adults. The glitz and glam, the luxury surroundings, and ... 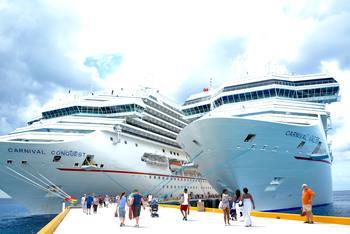 Yacht Charters Vs Cruises: Which is Best?

A holiday at sea is one of the most rewarding and relaxing ways to unwind. Take a look at yachts versus cruise s... 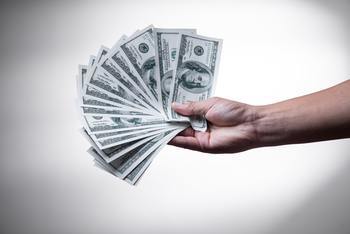 How Much Does it Cost to Charter a Boat?

Chartering a yacht is a dream holiday. Whether you choose a bareboat sailing vacation, a crewed catamaran or a l...