A legend in the making:  The Prince Madoc, a beautiful 65ft stays'l now available for purchase by auction in January 2019.

We’ve unravelled the story behind what was meant to be an iconic build; a lifelong dream of a former engineer and self-taught boat builder, who worked as a photographer in Saudi Arabia, Libya, Nigeria, and the USA, before returning to Cardiff more than 27 years ago.

For over 18 years Dave Denning threw his heart and soul into his lifelong dream of sailing the world in his own custom-built schooner.

Building a boat from scratch on a part-time basis in a lonely corner of Cardiff Bay boatyard, the future Captain worked tirelessly for six years before deciding to retire and take up the build full time.   He sacrificed his house and car and poured all his spare wages and time into the project.

Young people from all over the world came to help, learn and enjoy the build - their reward would be to join as a crew at some point in the future.

The 65ft hull would be cream in colour with a burgundy cove line, the interior and outside deck will be fitted in traditional teak style.  The teak was shipped from Burma and the masts cut from Canadian pine. Bespoke engineering of the highest quality. 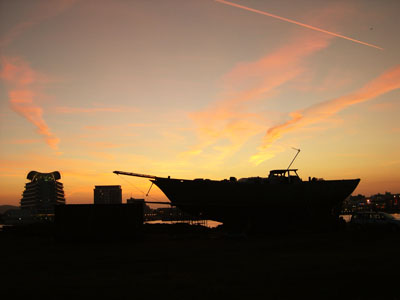 The build moved in sporadic bursts over 18 years, seeing the completion of the rough woodwork in the aft cabin, the installation of plumbing connecting the heads for the guest cabins and the application of plywood onto the frames throughout the boat in order to attach the decorative plywood at a later stage. 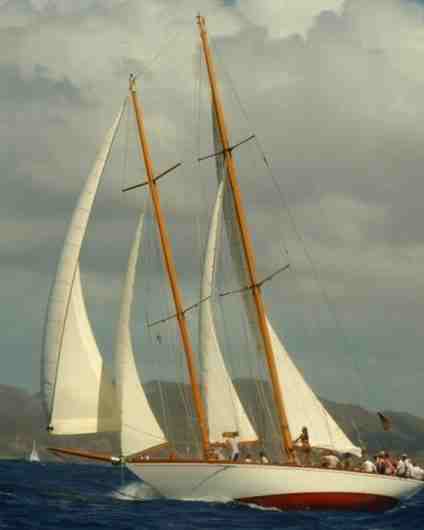 The Prince Madoc plans propose she has an identical sail pattern and masts to the Vixen II pictured above.

In 2014 just as the boat was nearing completion, the 72-year-old, who lived on the vessel in Cardiff for 10 years, suffered a devastating stroke bringing all work to a halt.

With time running out, the 65ft steel schooner was going to be sold for scrap and Dave’s dream would sink with it unless he could find an investor to fund the final phase of the build.

Left paralysed down his left side after the stroke, Denning was still living in a caravan in Discovery Quay just feet away from his pride and joy; this always giving him the motivation and determination to finish the project but his debilitating condition made life hard.   Life was really tough and his dream was slipping away.

Touched by the former maintenance engineer’s plight, friends and family started fundraising to find the additional £60,000 needed to get the boat on the water with him on board.  They all worked tirelessly to no avail.

Sadly, Dave passed away in 2018, thus leaving his dream ship partly completed. This boat is now sold on rightboat but visit the website for more similar boats for sale.

The boat is being sold at auction by Cremyll Keelboats Ltd, a registered charity which has acquired all rights to a previous tenant of the site on which Prince Madoc stands.

The charity is exercising a right to sell the vessel and all its accouterments.  The sale will be affected by an online auction between 13th and 20th January 2019 by GCA Consultants Ltd.

The successful buyer will be expected to remove Prince Madoc by 30th January 2019.  This is an opportunity to buy a blue-water cruiser at a fraction of her cost to date.

Who was Prince Madoc?

Beneath the shadow of the Cathedral in Bangor lies in peace the body of Owain Gwynedd, the greatest Prince of Wales. But immediately upon his death in 1170 there was fierce rivalry between the many sons of his many wives, fighting for supremacy over North Wales from the river Dovey to the river Dee.

In the first battle (at Pentraeth on the Island of Anglesey) the first brother (a poet and a warrior) was cut down, and the remaining sons of Owain forged a treaty to divide the mountainous land between them.

One of the younger sons, however, was Madoc the Bold, a brave and daring adventurer who cared little for the pleasures of land and wealth - his passion was for the sea.