About this Sunseeker 116 Yacht

"FREEDOM” is one of the finest examples of the spectacular Sunseeker 116 Yacht. Combining comfort and style throughout with striking exterior lines and a stunning open-plan layout, accommodating up to 10 guests in her 5 stateroom layout. Her twin 2,600hp MTU diesel engines allow speeds of up to 25 knots. With just one owner from new who operates her privately (no charter). This is an outstanding opportunity to beat the build times.

A spacious flybridge and aft cockpit feature plenty of social and sunbathing areas and are perfect to entertain guests. The foredeck offers further social and sunbathing areas, and includes a jacuzzi. "FREEDOM" offers a beautiful, open plan layout. Her full beam master cabin offers incredible space and features a stunning ensuite amongst the flowing design. With 4 further ensuite guest cabins, she can accommodate a total of 10 guests amongst her 5 cabin layout plus crew accommodation for 5.

Air Conditioning for the engine room

Inboard berth moves outboard to create double berth - Ensure that bed linen is ordered for both double and single set up. Infill is supplied for double set up plus track infills to be supplied. for the Port Forward Twin Guest Stateroom

Inboard berth moves outboard to create double berth - Ensure that bed linen is ordered for both double and single set up. Infill is supplied for double set up plus track infills to be supplied. for the Starboard Forward Twin Guest Stateroom

Main Deck Saloon sliding door on the port side

Main Deck Saloon sliding door on the starboard side

Seadoo RXP-X Jet Ski supply and fitted in the garage

Seawater pressure washing of chain with outlet in each hawse pipe

Each Anchor chain is to be marked every 10 meters - R.Y.B.W.G

Removable polished stainless steel bathing ladder with teak treads. One set of sockets on the aft face of the bathing platform and dedicated ladder stowage in the garage

Second set of stainless steel bathing ladder sockets on the aft face of the bathing platform.

Teak Decking on the Aft Cockpit and Bathing Platform

The tropical A/C system in the Platinum pack comprises of

Idromar Chlorine dosing unit. Will disinfect the freshwater supply from the connection point in the starboard aft service locker or from the water maker.

Hansgrohe removable shower stand over the platform, in place of standard

Discharge is via a Gianneshi 400V 3 Phase 50Hz self priming centrifugal macerating pump to directly over board or the black water tank to that the waste can be removed via a shore side facility when available or to the optional sewage treatment system if specified.

Black water holding tank is an integral GRP tank of 1340 litre capacity. Discharge via a Gianneshi 400V 3 Phase 50Hz self priming centrifugal macerating pump to either a shore facility when available or directly overboard (refer to MARPOL regulations) or a Sewage treatment plant if the option is taken.

The tender garage space has a deluge system comprising of three sprinkler heads.

Bilge pump system with primary engine room pump being the Gianneshi self priming centrifugal 400V 3 Phase 50Hz 5.5kW and a secondary (as shared with the Hydrant system) Gianneshi self priming centrifugal pump powered by an independent diesel engine located in the laundry room. Both are coupled to bilge manifold valve blocks which are connected to the strum boxes throughout the boat.

Fitted in the tender garage is a Gianneshi self priming centrifugal 400V 3 Phase 50Hz 2.2kW bilge pump with strum box.

Diesel fuel day tank is an integral GRP tank of 4,525 litre capacity with an AC transfer pump to replenish from the main tank.

Shore power configuration is a single 100A plugged flexible 20M cable on an electric reeling system.

The above touchscreen interfaces allow the control of the following systems.

Display of the main generator parameters.

Control and monitoring of all major fluid pumps (Fuel Transfer, Black and Grey)

Monitoring of status of all the main circuit breakers.

Monitoring and control of navigation lights.

Monitoring of doors and Hatch Status.

Fire Alarm Monitoring. Pop up alarm in the event of active fire alarm

Icemaker Victrofrigo Classic in the Galley

Refrigerator. In the Aft Cockpit bar

Icemaker Victrofrigo Classic on the Flybridge

Underwater lights. Lumishore white LED 15 lights with 5 across transom and 5 on either side

Network and communications system as follows:

User ability to select data method depending on availability. Note: Owner to supply 3G/4G SIM cards, set up for roaming.

A Panasonic PABX telephone exchange system KX-TES824 shall be fitted as standard and will include the following handsets.

An integrated Sonos System will allow audio streaming throughout outside areas and saloon.  Audio streaming can be via any Apple or Android equipment with Wi-fi capability. Sonos Control App needs to be installed.  One tablet is supplied as standard.

9. Each of the two Crew Cabins and the Wheelhouse have the following Audio. Fusion CD/FM Tuner with Bluetooth function. Fusion Speakers x 2.

Timber interior floors are fitted as standard in the wheelhouse, non slip floors in the servery and rest of the areas are carpet

Williams 565 Diesel Jet fitted in the garage (to standard specification)

Lobby with timber floors, Saloon and Dining area flooring to be timber.

Fit Trash Compactor in the galley

Seating opposite the helm to have an  L shape

Teak coffee table to be fitted between sofas, fitted loose

Bar to be locate between the new servery location behind helm seats and the forward end of the stbd sofa. Move the bar unit as far out board as possible, trying to achieve a minimum of 80cm between the open dining table and the back of the bar stool - See GA

Fit the modified 155 bar unit in white GRP ( a cut down version, to fit in the same floor space). Stainless foot rest required around the bar attached to the bar. Charge for the foot rest

L shaped seating on the port side, 40 cm high to top of cushion (90cm deep)

Two open and rotating tables to give a total length of 240cm x 120 cm. When closed gap between the two table tops to be 35cm. 65 cm high, to be fixed height. Charge for additional table.

Sunpad to be 2.1m x 2.1 m with fold up back rests to face forward and back. Drinks holders to be fitted to the sunpad 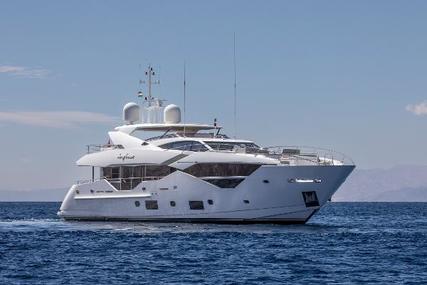 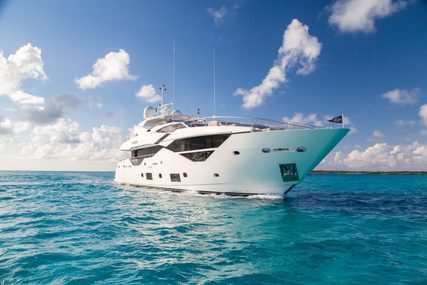 Length: 35 m
Year: 2022
P.O.A.
The cutting-edge 116 Yacht is built upon the proven platform of its hugely popular predecessor,...
View More 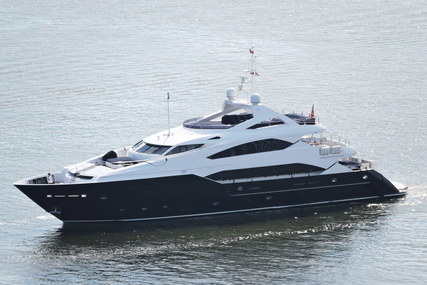 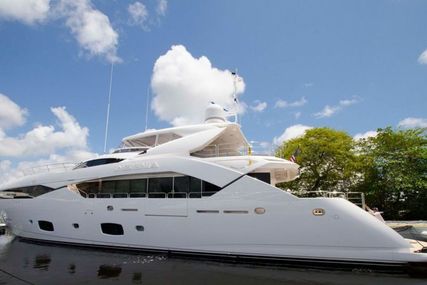 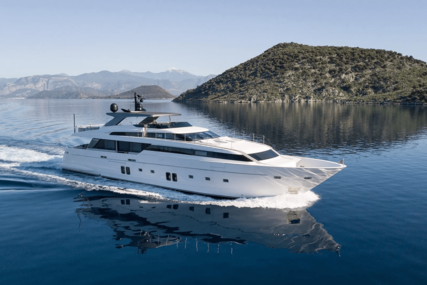 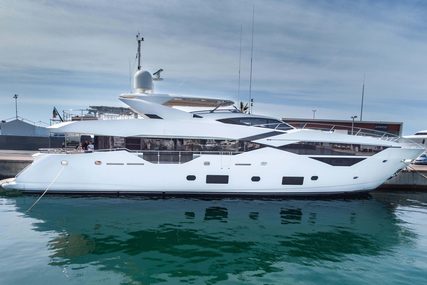 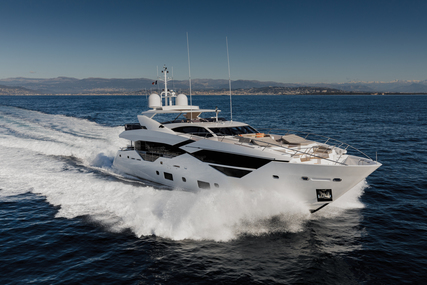 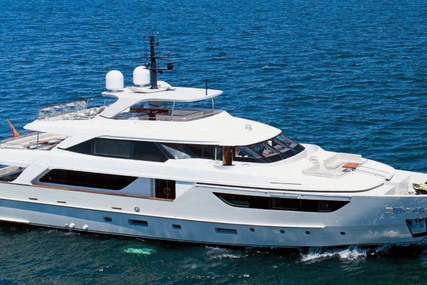 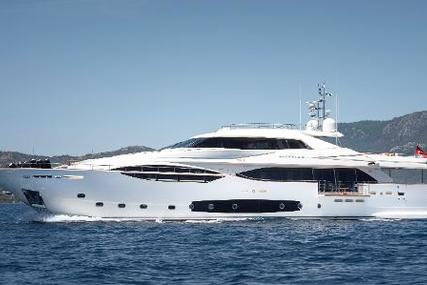 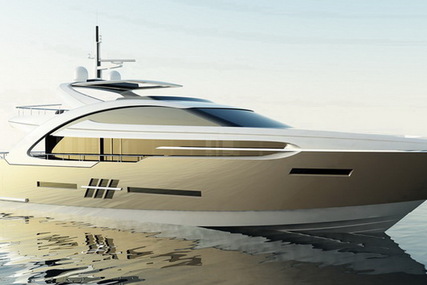 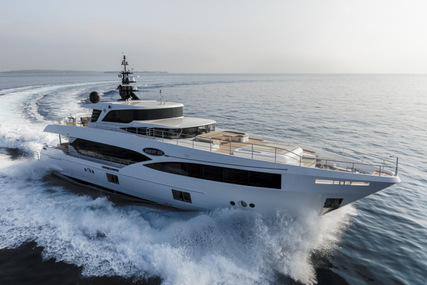 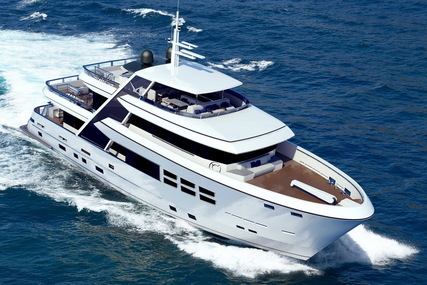 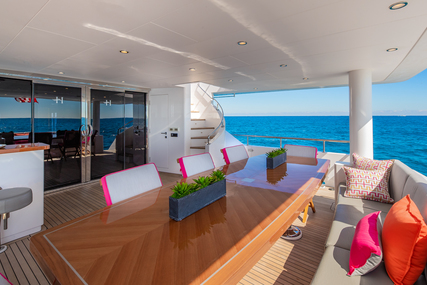 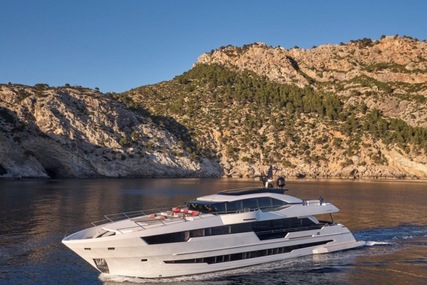 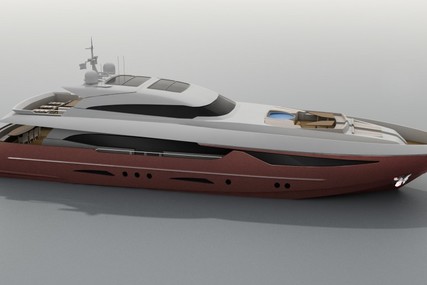 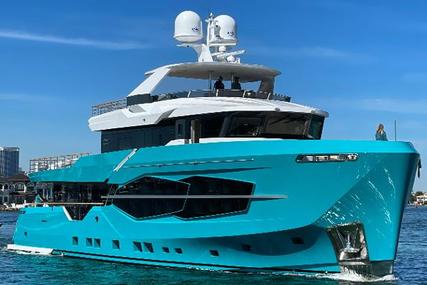 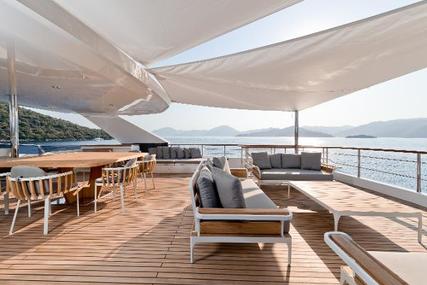 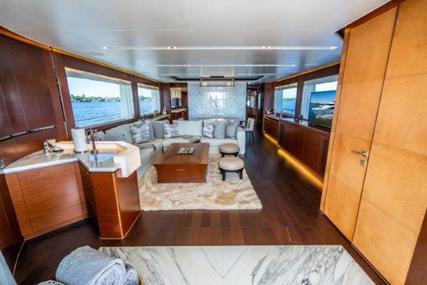 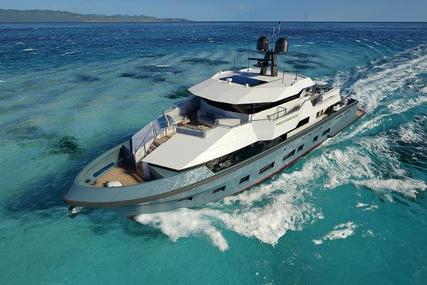 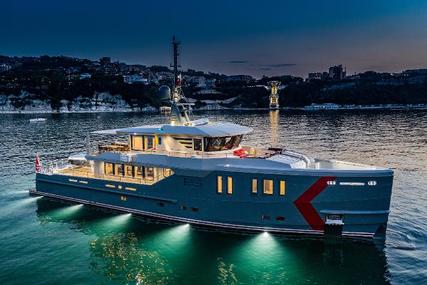 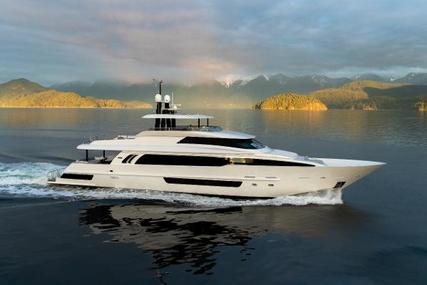 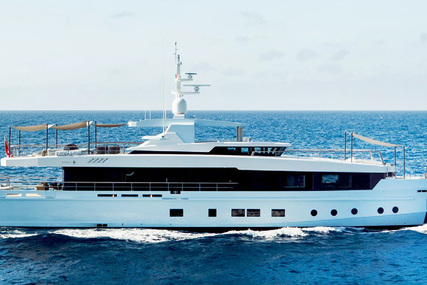 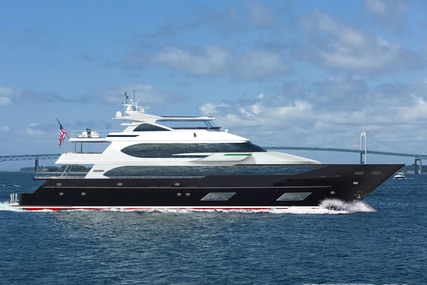 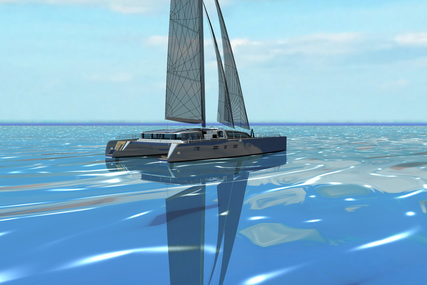 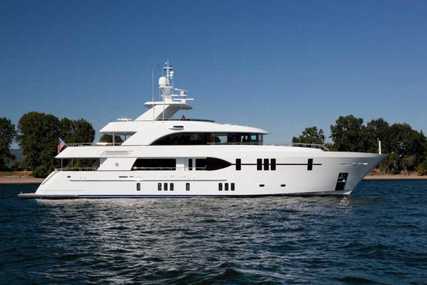