WARRIOR built, by Camper and Nicholson as a naval pinnace for the Royal Navy was launched in 1912.  After the First World War she was used by Commander C A Lund to instruct naval officers in navigation and seamanship at HMS King Alfred in 1942. She also served as a coastal defence vessel after Dunkirk. In the 1960s WARRIOR was re-fitted at Dickies Yard in Bangor. In new ownership she was taken through the French Canals to cruise the Med. After returning to the UK she was lived aboard in the 1980s in Torquay.  WARRIOR is believed to be one of the few ships left that has taken part in both World Wars and is an authenticated Dunkirk Little Ship. Now a major project a new owner is sought to restore this historic vessel.

Three lower level cabins with another berth in the aft passage way. Built in furniture in the two aft cabins with hardwood joinery hardwood thought to date from 1912.

Cabin One leads to the Forward cabin. Currently unused. Originally contained Admiralty crew bunks. Could have two to four bunks reinstated or turned into a large luxury heads for cabin one.

Forward stowage contains the anchor locker although large enough to contain a heads as well if required.

Day berth in passage way between cabins two and three, this could easily be converted into two bunks.

Full headroom throughout. Full of character. WARRIOR can very comfortably accommodate 7 or 8 adults over night – further modifications could turn that into 11-12 quite easily.

Front cabin roof approx 3 x 3 m can be used as sun deck to lounge around on.

Eight or so light wells built into the deck light the below deck.

Saloon, galley and helm position all in the same area of the ship (approx 10 x 3.5 m) windows all around. Contains the original galley table. The galley kitchen is functional, hardwood work tops.

Current salon layout has a lot of empty space, great for storing bikes but offers huge potential for re-modelling.

Helms position, at the front of the saloon, is enclosed by windows, the corner ones of which are made from curved glass.

Accessed through trap door at the helm.

Twin Gardner 6 LXS engines 110hp, 6 cylinders diesel. One tank (1000 lt) supplying both engines.
Both engines run very evenly. We did a 3 day trip up the Rhone earlier this year when the river was running at a thunderous 1800m 3/sec. We were making 5 knots over ground with the current flowing at 5 knots towards us and the engines were ticking over very happily. Propelling us along at 10 knots and using about 16 litres per hour to do so.The starboard engine is in good working condition. The port engine, although running fine, is going to need some attention in the future having a blocked heat exchanger. WARRIOR has spent the last decade on the French Canals but some salt water has leaked form the external water reservoir and lead to some calcification on part of the lower engine block. Two brand new Bowman heat exchangers are ready to fit.Replaced impellers in the water pumps. Oil in the engines, oil filters, fuel filters, belts amongst other things.Work Required: Replacing the saloon roof – a slightly pitched flat roof. Incidentally, the roof could be adapted to either accommodate a fly bridge if desired, and also offers space to easily store paddle boards/canoes etc.

The bulwark around the front of the boat needs replacing

Some areas of the deck need re-caulking. Deck planking seems in good condition but some of the support joists (3 x 2 inches) underneath need replacing. Only short lengths, nothing more than about 50 cms. This is required in about 4 areas of the boat. One under where the previous owner had a washing machine for example. One under where he had a hot water tank which was leaking.

Deck needs repainting or sanding back down to the timber.

Re wiring. Everything seems to work but the wiring is haphazard. Two Master Volt switch boards.

OWNERS COMMENT:
To counter balance these negative points is obviously her rich history and the quality of the space she offers. This was why we bought her. She is such a wonderful vessel to spend time on. She is light, airy. The salon is incredibly generous, the back deck is spacious. She has long companion ways on either side of the cabin where people can find a few moments of piece and quiet on their own and watch the world go by. A front deck for catching the sun. There is a large unused room in front of the forward cabin which we plan to turn into another heads and also house a 200 lt hot water cylinder. Another smaller cabin in front of that that could store all sorts of beach equipment, washing machine, diving gear who knows. She’s big enough to have a few bikes onboard, the roof layout can be rejigged to accommodate thermal water heaters along with the solar panels, mains powered  ac unit if needed. She is a beautiful boat to look at and she cuts through the water effortlessly. I believe she’s made at least 4 trips through the Bay of Biscay on her way to and from the Med. The opportunities she offers are immense.

Navigation manuals – written by Commander C.A. Lund who lived on Warrior and taught navigation to naval officers around the 1950s

NOTE: Archive and more recent images (Autumn 2021) supplied by the owner for interest only and not representing the vessel's current condition. 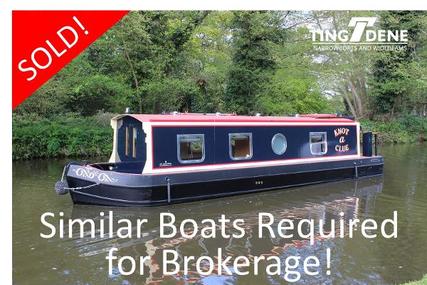