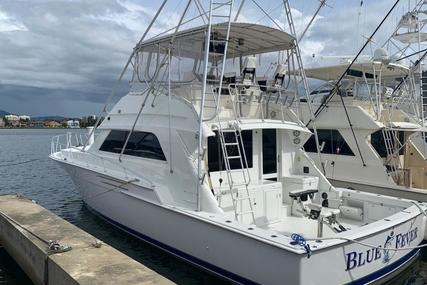 Bertram is among one of those companies that has a legendary racing pedigree and finest racing heritages in boat building. Bertram was set up in Miami by Richard Bertram, a champion sailor, best described by Sports Illustrated as “one of the finest ocean racers anywhere”. Bertram won over twenty races including America’s Cup in 1958 in his racing career that spanned for nearly twenty years. In the year 1960, Richard founded Bertram Yachts and began the first large production run of boats. Bertram sold the company in 1964 and it has changed ownership many times in the following decades but has kept the important DNA of Bertram's original vision.

The iconic US builder is known for its legendary Moppie yachts, built from 1960 to 1990’s.

The very first Bertram 31 Moppie won the Miami-Nassau Race in 1960, challenging and defying the worst weather conditions of the event's history. The Ferretti Group acquired Bertram in 1998 and the production has concentrated on its line of sport-fishing yachts. Bertram has a well-deserved name and position for building rugged, high-quality boats with an interesting history. It was one among the three first production boat companies to start up in 1961 along with Hatteras and Henry Hinckley Company, all known for producing top quality boats. On April 28, 2000, Bertram died, leaving behind a boatbuilding legacy and colorful past. Later, the Gavio Group officially acquired the US sportfish yacht builder Bertram Yachts from the Ferretti Group.

The Bertram range consists of three base models:

Bertram yachts always stand out because of its foundation in tradition and every model is performance-oriented, practical and made of only quality materials that make it ready to stand up to anything the sea can dream of. The Bertram yacht manufacturer’s aim is to always push themselves to dream bigger and always be forever original. So, select from the many Bertram yachts for sale listed at www.rightboat.com and step aboard to make amazing memories with your family and friends. And if you have a pre-owned Bertram yacht, you can sell your yacht online through www.rightboat.com where your selling is made easier and simpler.

1. When is the founder of Bertram and when was it founded?
Bertram was founded by Richard Bertram in the year 1960.


3. What are the special features of the Bertram 35?

The 35' 1'' Bertram 35 remains a timeless craft with superior fishing capabilities as it is built with an ageless and enduring foundation. Skilled craftsmen who are boaters themselves have built it with the smallest details being taken into account. Each and every component is hand-selected to create a timeless, elegant design both inside and out. The 35 can accommodate our Bertram families and fishing boat crew wherever they go with the ample storage above and below deck.

Bertram yachts aim to create a superb handling craft that is capable in all weathers and seas and will prove it true once again with the release of the Bertram 50 in the year 2019.

5. What are the special features of the Bertram 61?

The 61' 1'' Bertram 61, with the latest innovations by the Bertram team, manages and handles the roughest of seas like an art form at ease with its trustworthy, reliable and superior performance boat. Taking the Bertram legacy into the future, Bertram 61 pays homage to Bertram 54.