Monohull vs Multihull - The Great Debate, One or Two Hulls?

Monohull vs Multihull - The Great Debate, One or Two Hulls?

It’s one of the greatest debates amongst sailing enthusiasts - multihull or monohull? In recent decades, multihull craft have gained in popularity. Just skimming through the sailboats for sale on Ancasta reveals a plethora of choices of multihulls from the humble Hobie Cat to the larger and far more sumptuous Lagoon Seventy 7. But which is better? The multihull or the more traditional monohull?

Below we’ve looked at a few factors to help you to decide:

Probably the first difference you’ll notice between the two hulls is the lack of heeling in a multihull. Generally, even under power, a multihull, with the exception of large performance cruising craft, will rarely heel more than 5 or 10 degrees. This is down to the weight bearing and wide hull design inherent in a multihull. A monohull vessel keeps upright with the aid of a heavy weighted keel suspended below the water, meaning, in theory, the laws of gravity should not permit the keel to come out of the water. Therefore, unexpected gusts can be dangerous at worst or, at best, lead to seasickness for the uninitiated. On the other hand, the heeling of a monohull provides the sailor with vital clues as to the prevailing conditions and the amount of sail being carried. Multihulls also tend to suffer from a noisier ride and a quick motion which some find unpleasant in heavy weather. The difference between the two designs is highlighted when a craft is at anchor. A gentle swell is often enough to turn a mill pond into a rollercoaster for a monohull boat. 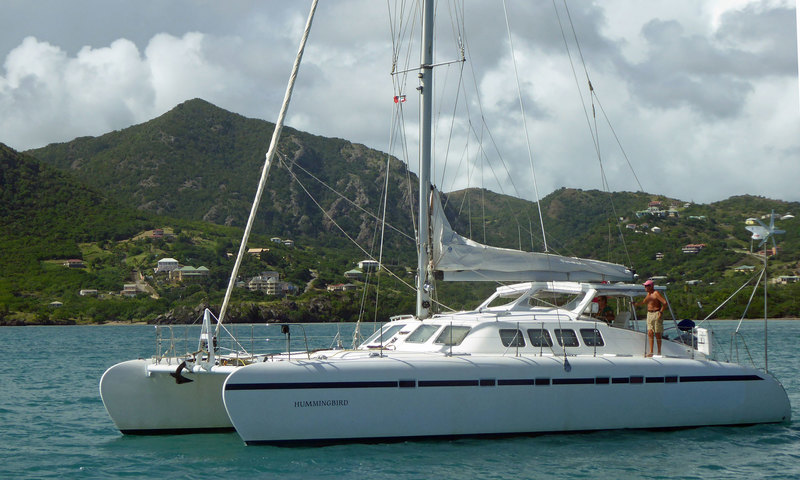 On speed alone, multihulls win hands down. Depending on their angle, a multihull can sail half the speed of the wind and are about 25-30% faster than the equivalent length monohull. Multihull’s speed is down to their power-to-weight ratio. They have a large sail area in comparison to their light weight hull. The width and low wetted surface area are also factors in the performance of a multihull. However, the ride is far less comfortable than in a monohull and they are far more sensitive to loading. A multihull loaded for cruising will lose more performance than a comparable monohull. A catamaran will stay upright on all points of sail which significantly helps to reduce fatigue and seasickness.

Multihulls are inherently stable by design. They can obviously capsize, but their natural buoyancy makes them virtually unsinkable. The larger deck area on a multihull is also a major safety factor, making moving around a far safer prospect than on a more cramped monohull deck. As multihulls are faster, it is easier to sail around severe weather systems before they strike. However, monohulls have far superior “self-righting” capabilities in worst case scenarios. Once a multihull has capsized, it stays capsized, whereas righting a monohull will give you access to any onboard safety equipment, floatation devices, etc. 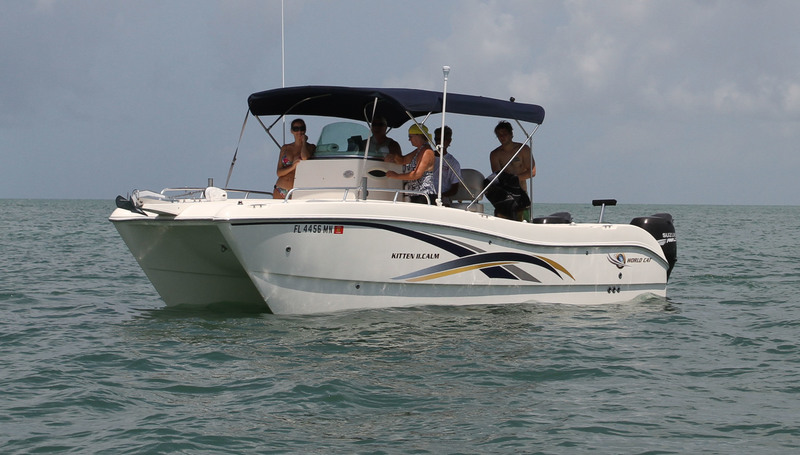 With their reduced wetted surface area, multihulls are far more fuel-efficient, needing only one engine to propel the craft in light winds. However, in heavier weather the less resistance offered by a monohull is more favourable. Monohulls, as a rule, have larger capacity fuel tanks as they can bear a heavier weight than multihull craft.

Typically, most cruising multihulls have the space equivalent to a monohull 10ft larger and nearly all that extra space is liveable. Combined with cockpit space, a flybridge and larger deck area, it looks like a slam dunk for the multihull. However, multihulls have not one but two rather cramped stairs to get down into the hulls and this space can feel claustrophobic and narrow. Monohulls tend to feature larger berths. 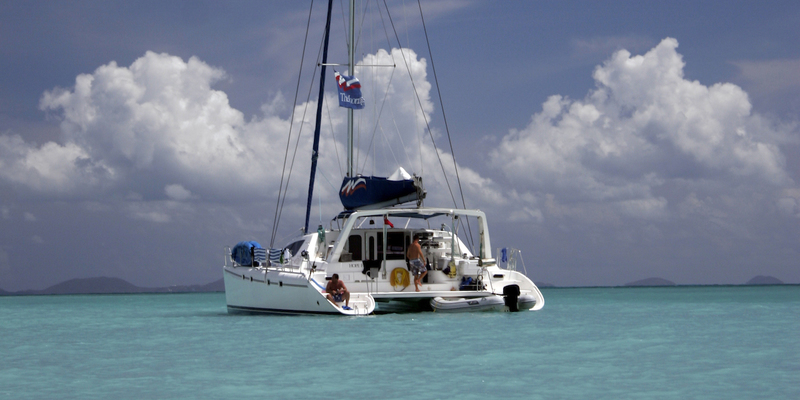 Monohull vs Multihull  Performance and Manoeuvrability

Light in weight and with their easily driven hull form, multihulls keep track straight and offer very good fuel efficiency. Most catamarans have twin engines which allows for precise control in tricky situations to the point of being capable of being crabbed sideways without any way on. The shallow draft on a multihull allows navigation of much shallower waters than a monohull would be capable of. On the other hand, manoeuvring a monohull may be easier a there is only a single engine to deal with. They can make sharper turns and, with having a higher hull displacement the adverse effects in a cross wind can be reduced.

One of the most noticeable difference is during tacking. A multihull’s wide beam and lightness can make tacking, even in a light wind, challenging. In a monohull, the mainsail can generally be ignored but in a multihull, you would sheet it in to enable it to act as a wind vane to help steer the bow around. It may also be necessary to backward the jib to help get the bow through the wind.

Monohull vs Multihull Docking and Beachability

Whilst it is easy enough to dock a multihull, their sheer size means that they don’t always fit into a traditional slipway. A monohull is far easier and cheaper to dock, haul and slip. However, a multihull’s shallow draft enables it to reach shallower water than a monohull. Most multihulls can be dried out, resting on its stubby keels on any area of flat sand or solid ground at low tide making any minor hull repairs a far simpler prospect than on a monohull.

As a multihull will have at least two of most things, there is obviously more maintenance required resulting in higher costs. 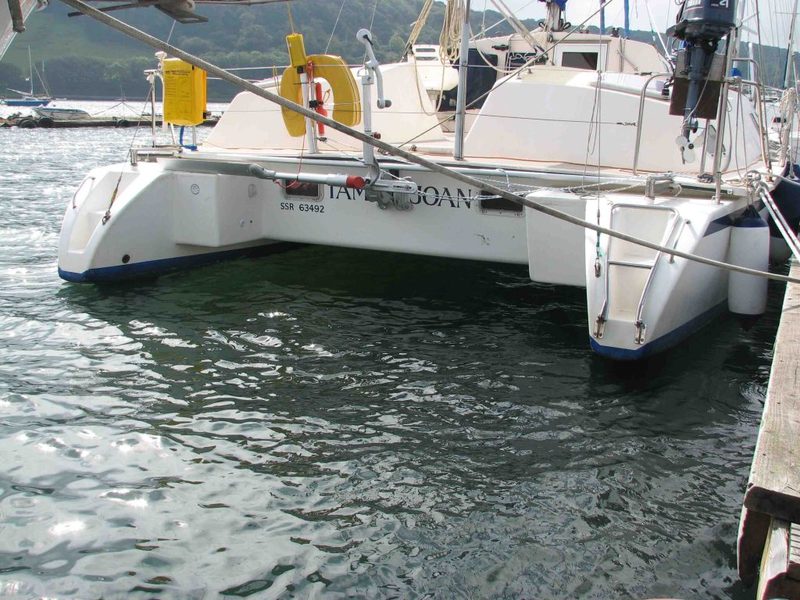 Multihulls are much more expensive than monohulls but they do hold their value well with very low depreciation. However, with the increasing popularity of multihulls, the used market is seeing more and more examples for sale.

In conclusion, I think it’s safe to say, there’s no outright winner. Both craft have their pros and cons. Whilst some prefer the increased stability of a multihull, others feel that this stability removes them from the very essence of what sailing is about. There’s no denying the fact that multihull vessels are the direction boat design is heading in the future. I’ll leave the last words to pioneering multihull sailor, Rick White.

"What if America had been discovered by the Polynesians, rather than Scandinavians? Well, we'd all be sailing multihulls. Then Someone would come along and say, "Hey, I have a great idea. I'm going to design a boat with just one hull." Everyone would ask how it would keep upright and Mr. monohull would reply, "weights and a deep keel. I'll put a lot of weight down deep in the water." Then everyone would ask if that wouldn't make the boat go very slow, and he would enthusiastically reply, "Yes!, Yes!, YES!". You can bet slow and heavy would soon have advocates and a new novelty would be born." 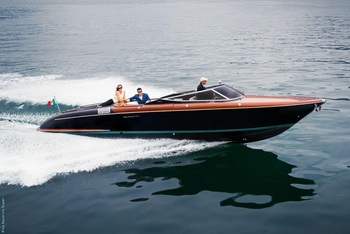 Small Luxury Boats with a Difference

Traditionally, luxury yachts were superyachts, and even when we refer to a ‘small’ superyacht’ we are discussing... Is Living on a Boat Right For You? The Pro...

It makes for excellent dinner party conversation when you announce that you live on a boat. You will see people’... 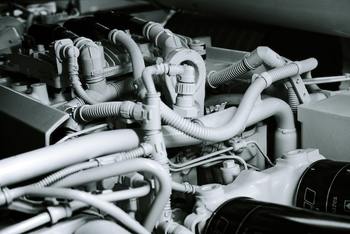 How to Winterize a Boat Motor: A Step-by-S...

For many boaters in the northern hemisphere there comes a time in the fall when we have to admit that it’s time ... 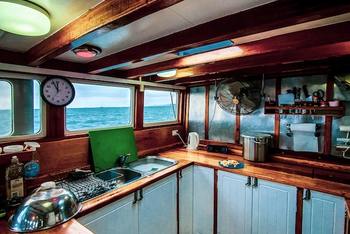 Planning the storage for your boat is never quite as straightforward as it might seem, and it’s very different t...