Ask the average Joe on the street to name a luxury motor yacht manufacturer and the chance are they’ll pick Sunseeker. It’s one of the most recognisable brands in the world today.

The company has received the ultimate product endorsement of appearances in no less than four James Bond movies since 1999, putting the brand up there with the likes of Aston Martin and Omega watches. Today Sunseeker are a major mover and shaker in the yachting world, employing over 2,000 skilled designers, engineers and master craftsmen, and operating a worldwide network of over 80 service and retail outlets, exporting around 140 yacht a year to over 45 countries. It’s hard to believe that a company that is commonly perceived as the very epitome of Hollywood glitz and glamour has its humble origins in an English seaside town in the late sixties, the brainchild of an innovative boat builder, Yorkshireman, Robert Braithwaite. 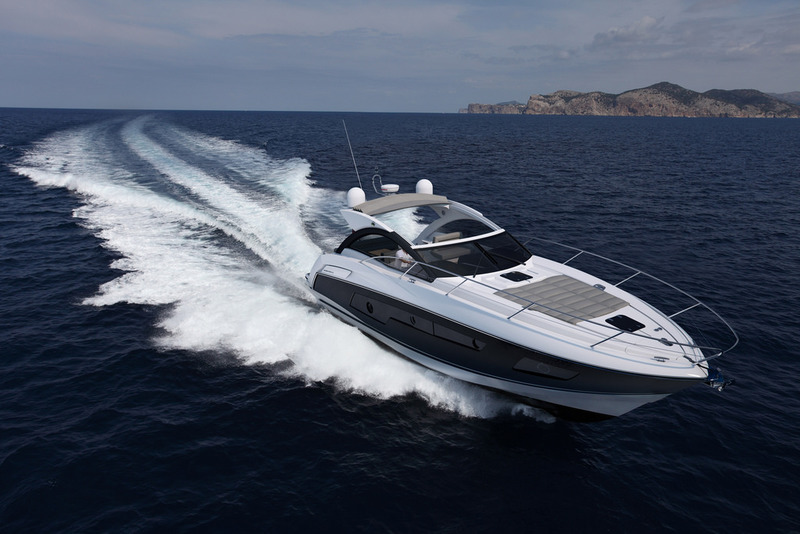 Braithwaite was born in Otley Moor, Yorkshire in 1943. After leaving school at the age of 14 with no formal qualifications, Braithwaite parents moved south to the Hampshire coast and opened a chandlery and outboard business near Christchurch. Braithwaite, following his dream of building boats, spent a few years servicing outboard engines and undertook an engineering course before serving a six-month apprenticeship at OMC marine engineer suppliers in Belgium. In the early sixties, Idris, Robert’s father, and his business partner, John Macklin, relocated their business from Christchurch to nearby Poole and changing the name from Friar’s Cliff Marine to Poole Powerboats. This location gave the business shoreside access and they branched out into sportsboat sales, becoming a dealer for brands manufactured in Scandinavia, USA and the UK.

The US company they dealt with, Owen Cruisers, decided to pull out of Europe altogether and announced they were closing their UK operation down. By this time, Robert, followed a short while later by his brother John, had joined the business and soon the wily foursome, despite having no experience of building seagoing craft, began making plans to build their own boats. They would incorporate the best features of the boats they’d been selling combining the robustness of an American boat with the high standard of finish of a Scandinavian vessel coupled with a healthy dose of British conservatism. Robert secured a loan of £5,000 and negotiated a deal with Owen Cruisers to buy their boat moulds and production began on their first vessel.

Back in the late sixties/early seventies, there was almost a complete absence of sports and leisure boat builders in the UK, with overseas manufacturers dominating the market. Keen to exploit this gap in the market, Poole Powerboats launched their first craft, Sovereign 17, in 1971. Although not strictly a Sunseeker, this beautiful craft featuring classic lines and a genuine sporting ability, clearly indicated the direction the company was heading in. The 17 was closely followed by the Sovereign 20.

By 1972, the company was exhibiting at the Southampton Boat Show. It was here that Sunseekers’ belief in giving the customer exactly what they wanted first manifested. Formula One driver, Henry Taylor, saw and fell in love with the 17 and 20 but wanted one wide enough to fit a full-sized sunbed in. The team was more than happy to oblige and soon produced a successful boat fitting Taylor’s specification. Although the company’s ambitions were to build boats, they boosted the business by becoming distributors of Coronet, Windy and Draco sportsboats and for Volvo Penta engines.

By 1976, Poole Powerboats had designed and launched the very first boats to feature the Sunseeker name, the sleek, low-profiled, two berth Sports 23 and four berth Daycab 23. The Daycab 23 was the real star. It featured a galley, a toilet and a hand-crafted teak bathing platform of equal quality to anything coming out of Scandinavia at the time. Between 1976 and 1979, over 120 Daycabs were built before it was replaced by the Sunseeker 235. By the time of the 235’s building, Sunseeker were selling well in the UK and northern Europe but the Mediterranean was proving a tougher nut to crack. To help break into this lucrative market, Robert and John approached racing boat and superyacht designer, Don Shead. Shead, a former powerboat racer turned designer of racing boats and superyachts, had never designed a production cruiser before but soon saw the potential of combining his unique craft with Sunseeker’s ethos. The first product of this partnership was the revolutionary Offshore 28. 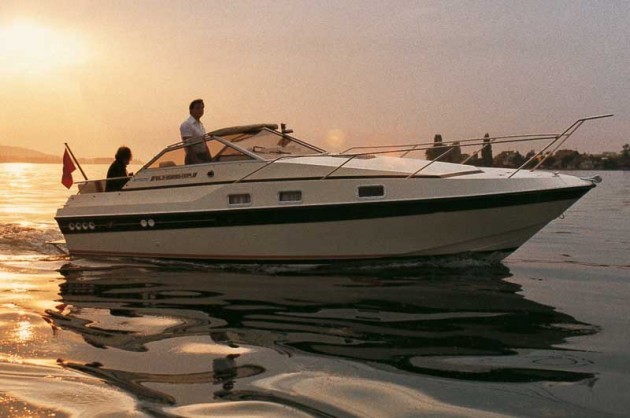 Shead’s innovative hull design combined with Sunseeker’s luxurious sense of style was clearly apparent. The Offshore 28 was a true performance craft and won sales in the south of France, Spain and Germany. It was now that Poole Powerboats officially became Sunseeker International.

Priding themselves as being different from their competitors by taking their inspiration from how owners wanted to use their boats, by the mid-eighties, Sunseeker was rapidly building and expanding a solid customer base. During this time, Sunseeker began collaborating with renowned yacht interior designer Ken Freivokh to help them upgrade their interior styling. Craft such as the Portofino 31, designed to host larger groups of people, oozed style and sophistication with its wide and comfortable two cabins. Another model of note launched at this time was the Tomahawk 37. This iconic design epitomised Sunseekers’ emphasis on fun and performance. Not looking out of place in a modern-day marina, the Tomahawk 37 was a practical boat that truly delivered on performance and style.

By the nineties, Sunseeker were drawing influence from the softer curves and shapes utilised in car design. Together with an increasing demand for larger vessels, Sunseeker launched in 1990, to tumultuous applause at the Southampton Boat Show, the Renegade 60. This was one of the first production leisure boats to be powered by water jets. It featured three staterooms, a deep, open cockpit and a large sunbathing section aft. The Renegade 60 was a bold superboat capable of agile handling and a top speed of 45 knots. It combined the handling and agility of a smaller boat with the luxury of a much larger craft.

Another model of note released at the time was the Predator 80. Over 80 feet long and weighing in at 50 tons, this dynamic craft could achieve speeds of over 45 knots and featured low-profile lines and a retractable carbon-fibre roof. It instantly became the benchmark in luxury yachting and innovative and imaginative design. 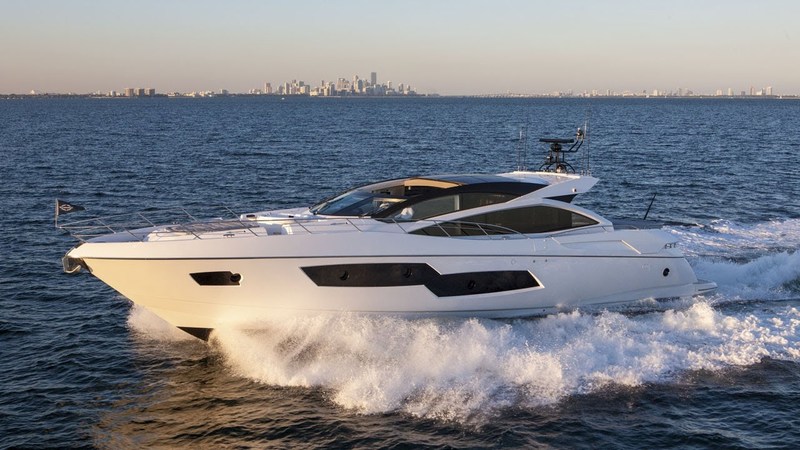 By the turn of the century, Sunseeker were taking advantage of advanced composite materials and modern building techniques to produce their largest vessel to date, the 105 Yacht. Many cite this craft as the point when Sunseeker became a true superyacht builder. The craft broke the magical 100-foot mark and featured four staterooms. It soon won international praise and International Superyacht Design awards and heralded the company into the new century in magnificent style. 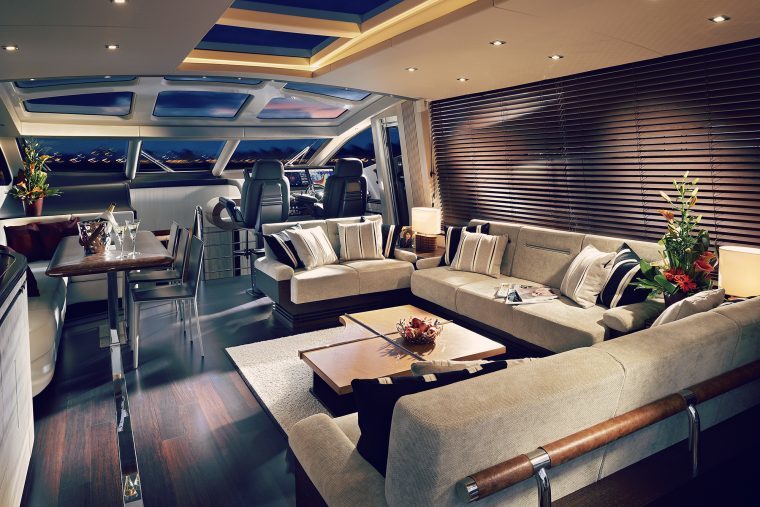 The company have continued to release new designs throughout the 2000s, culminating in their current flagship, the 155 Yacht. This vessel was launched in 2014 and is optimised for long-distance cruising. Its 60,000-litre fuel tank delivers a range of over 4,000 nautical miles. It’s a design big on space and style and is the most advanced and largest vessel Sunseeker have ever produced. It can accommodate 12 guests and 11 crewmembers and is owned by many of the rich and famous most notably former Formula One team owner, Eddie Jordan.

The global financial crisis of 2008, hit Sunseeker hard. In 2006, Robert Braithwaite, backed by the Bank of Scotland, had led a £44 million management buyout of the company and by the end of that year Sunseeker featured in the Sunday Times list Profit 100 and in the Top Track 250. Throughout the recession he kept investing and revenues took a dip. The core business itself was still sound but financial liquidity was strained badly. They supplied several boats to a foreign dealer on a basis of trust shortly before he went bust. The boats were never recovered. One of the two UK dealers, F&M Sales Group went into liquidation and Robert stepped to protect the brand. In 2010, FL Partners, an Irish private equity company took over ownership of the company through a debt restructuring deal. Then in June 2013, it was announced that the Dalian Wanda Group, a Chinese conglomerate, had agreed to buy a 91.8% stake in the company, paying £320 million. 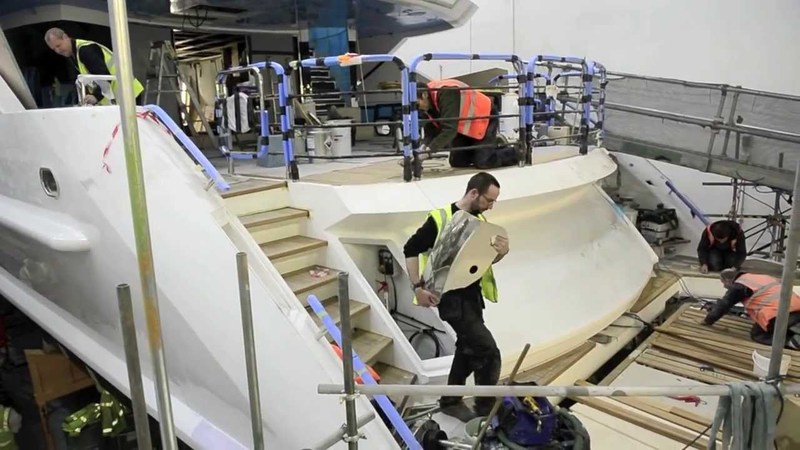 The 2,500 strong Poole workforce and day to day running of the company would remain unaffected and UK based. The deal was sealed in August of the same year. With the market evolving, Sunseeker are looking to move back into building “smaller” yachts and bringing in a wave of new buyers. In 2014, to international acclaim, they launched the 40-metre tri-decked superyacht, Thumper.

This is where the story really began. Built under the Poole Powerboats umbrella, this 17-footer displayed the classic lines and sports ability soon to be closely associated with Sunseeker.

Released in 1976, this 23-foot craft was the first to bear the company name “Sunseeker”. It came in two forms, a sports model and the Daycab version which featured a galley and two double berths.

Reputed to be the first boat in Europe to utilise a hull specifically designed for twin diesel sterndrives, the Offshore 28 and its big brother the 31, would prove to be vital stepping stones in the company’s future direction.

One of the first production leisure boats to be powered by water jets. At full throttle, it could shift 145,000 litres of water per minute and achieve a top speed of 45 knots. It featured three staterooms, a large aft sunbathing area and a couple of heads compartments.

A closed cockpit, high performance craft launched in the mid-1990s, the Predator 80 made a name for itself for combining top-end performance with high-end luxury. Weighing in at around 50 tons and measuring more than 80 feet in length, it could top 45 knots top speed. 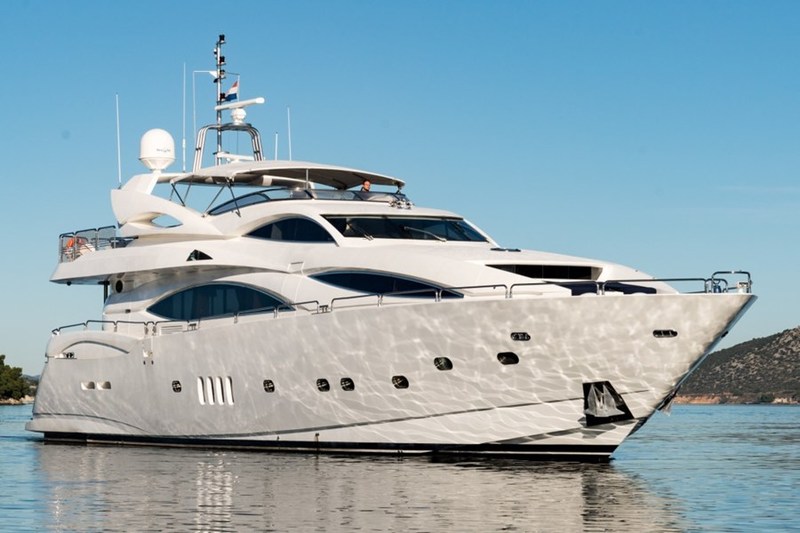 The first Sunseeker vessel to break the 100-foot mark and announcing the brand on the world stage as a true superyacht builder. Capable of 26 knots, this opulent and extravagant motoryacht helped catapult Sunseeker towards the higher echelons of the market.

A regular star of James Bond films from 1999 onwards, the narrowed beamed Superhawk sacrificed accommodation for sheer performance and pace. The Superhawk was all about fast sea passages.

Without a doubt, the San Remo is one of the most stylish and iconic craft Sunseeker have ever produced. 51-feet long with two Volvo Penta IPS Pod Drives taking it to a 30-knot top speed, the San Remo featured an expansive front deck and lounging space. In Sunseeker’s own words, “an icon of tomorrow” and who could argue with that?

The smallest boat in the modern Sunseeker flotilla, the Portofino 40 is fast and pretty. It was designed with aspiration and relative simplicity in mind. Probably the closest boat to Sunseekers’ Poole Powerboats roots than any other design. 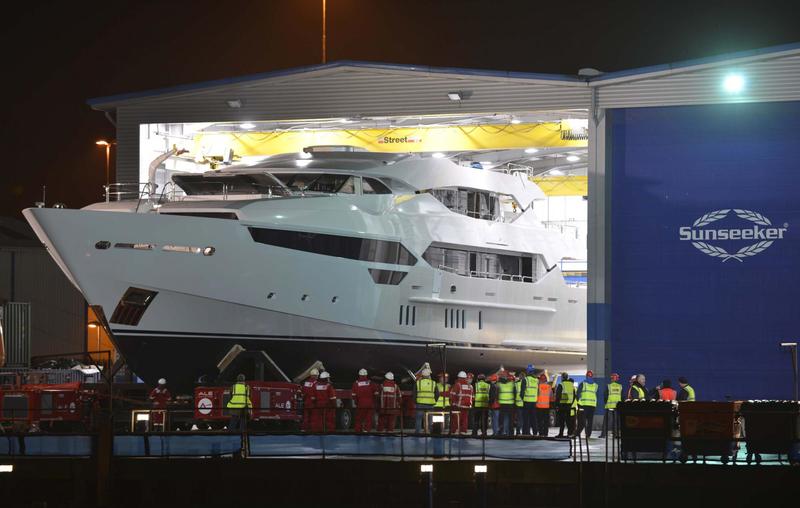 The largest and most advanced boat designed and produced by Sunseeker. It’s an amalgamation of space and style optimised for long-distance cruising with its 60,000-litre fuel tank delivering 4,000+ nautical miles. It’s a tri-deck design with expandable balconies and can accommodate 12 guests and 11 crew. Former F1 team-owner, Eddie Jordan’s 1555 features a nightclub!

10 Creative Ways to Make Money with Your Boat

There is no getting around the fact that to take care of a boat properly costs money. So what if there was a way...

Luxury On the Water: The New Breed of Hous...

Here at Rightboat.com we’ve always found it fascinating just what the word ‘leisure boat’ can mean. 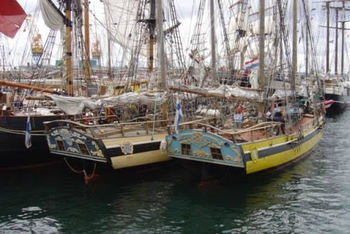 Where did the Elena Maria Barbara topsail ...

Rightboat are delighted to be offering the Elena Maria Barbara, the Topsail Schooner Vessel for Sale.